When installing wireless smart meters in the neighborhood, utilities typically attempt to downplay customer concerns with so-called “Fact Sheets” and marketing campaigns.  One of the issues normally deals with answering the following question:

“How often is my smart meter transmitting?”

Here are some of the actual answers to this question, as provided by utilities:

“Smart meters typically communicate using RF signals 48 times per day.  Each transmission is only a fraction of a second, which means smart meters transmit about 3 seconds per day on average.”  (Reference:  NV Energy website; see captured webpage image below, captured 6/7/13.)  [Note that the NV Energy and LUS somehow used the same “Myth vs. Fact” template, but NV Energy used somewhat different numerical values for number of transmissions and transmission time per day.]

The above information is “misinformation” due to “missing information.”  It is generally true that an individual customer’s smart meter is programmed to transmit his or her energy-related data back to the utility once every hour or once every few hours.  But that is an extremely small percentage of the actual number of transmissions per day.  The wireless smart meter performs many other functions, such as network management, time synchronization, and activities related to forwarding routed messages for other customers.  Smart meters chatter back and forth among each other throughout the day.  For that reason, it is correct to state that smart meters transmit a signal every few seconds (if not more frequent) on a round-the-clock basis, for basically forever, i.e., 24/7.  To state otherwise is deceptive.

It is likely that the original source of most of the utility industry misinformation is an Edison Electric Institute “white paper” document entitled, “A Discussion of Smart Meters and RF Exposure Issues,” dated March 2011.  On page 14 of that document there appears the following sentence:

“Smart Meter communications are typically less than a second and under normal operations, the programmed interval for randomized transmissions is 4 to 6 hours or longer.”

The above statement is very simplistic in nature and really only addresses the communications of one smart meter and the customer energy usage-related data collected by that one meter.  It has nothing to do with reality, in terms of smart meter radiofrequency emissions associated with communicating within a network of other smart meters.  One could say that utilities took that one statement “out of context,” misapplied it, and then spread it like wildfire.

Presented below is information presented before the Public Utilities Commission of the State of California in 2011 was intended to provide clarification on the frequency and duration of RF emissions from wireless smart meters.  The table below presents data for “scheduled” messages for Pacific Gas and Electric Company’s wireless smart meters operating in the 900 MHz range.  Scheduled messages are defined as those inherently required to sustain communications in the network that occur routinely without user intervention.  You can click on the table to enlarge for easier viewing.  [For the entire document, refer to:  PGE ALJ Response 01 NOV 2011 CPUC Document.] 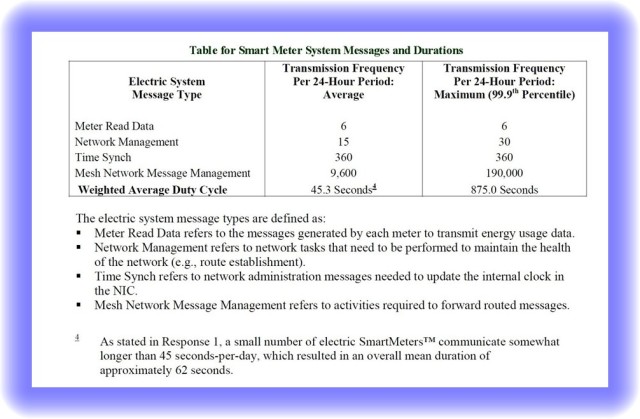 So, as you can see from the above tables, it is true that the utility “detailed analysis” shows that the “meter read data” for each customer is transmitted 6 times per day.  But if you are a person concerned about the RF emissions from a wireless smart meter, you are obviously interested in the total number of “bursts” of RF energy from the meter.  There are actually thousands and thousands of RF transmissions occurring for each wireless smart meter each day.  Also, there is no practical manner for an individual customer to know if his or her smart meter is “only” transmitting at the average rate of 10,000 to 15,000 times per day, or if you are the unlucky person who has a meter that is transmitting at a rate of 200,000 or more times per day.

The source for the above SMUD table can be viewed at:
http://web.archive.org/web/20150316152744/https://www.smud.org/en/residential/customer-service/smart-meters/common-questions.htm.

At one point in the above paragraphs, there was reference to “scheduled messages.”  Another pertinent question would be to ask about “unscheduled messages.”  These messages would pertain to such items as theft or tamper alerts, configuration errors, and firmware downloads.  According to one document prepared by the San Diego Gas & Electric Company, dated November 1, 2011, it was estimated that “communication between the customer’s meter and the utility is approximately 95% scheduled.  The 5% is attributed to ad-hoc contingency read request for meter mitigation and firmware downloads.”  It was further stated that “[t]he firmware download process is a background activity for the network typically spanning from 12 hours to 12 days (depending on the number/type of firmware modules downloaded).”

Thus, it would appear logical to conclude that during periods where smart meters are undergoing a firmware upgrade process that there would be a time span of several hours to days where there would be substantially increased RF transmissions and message traffic as compared to “normal.”

Another complicating issue is that most new wireless smart meters being installed in the United States and Canada contain two separate transmitters.  One transmitter operates in the frequency range of 900 MHz and functions within the Neighborhood Area Network (NAN), communicating with the utility and with other smart meters in the area.  The second transmitter operates in the frequency of range of 2.4 GHz and exists to function within a Home Area Network (HAN), communicating with “smart” appliances within an individual residence and with an in-home display unit. 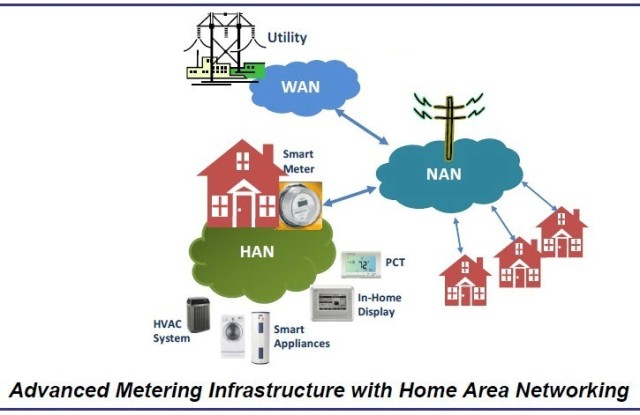 It is likely that the smart meter transmission data information discussed earlier in this posting only addresses the NAN communications.  Unfortunately, the utilities aren’t specific enough to explain what is what.  So what about the HAN communications?

Here is some limited evidence:

“Note that the 2.4 GHz ZigBee radio in the Elster residential REX2 meter is programmed to transmit beacon signals periodically, even if a ZigBee HAN device is not being used with the REX2 meter.  These beacon signals, which are part of the ZigBee protocol, let other ZigBee devices know they are within communication range.”

In addition, from a document entitled, “An Evaluation of Radio Frequency Fields Produced by Smart Meters Deployed in Vermont,” by Richard Tell Associates, Inc., dated January 14, 2013, it contains the following statements:

“Despite the fact that the Elster meters were not generally ‘activated’ to interact with In-HomeDisplays (IHDs), the HAN radios in the smart meters periodically issue a brief signal lasting approximately 1.75 ms once every 15 seconds plus a group of four closely spaced signals once per minute for a total of eight pulse emissions per minute.  These signals are presumably related to the HAN radio searching for IHDs in the vicinity to wirelessly connect to the meter.”

So even if a customer does not have a smart appliance or in-home display unit, the smart meter will emit, at least for some models, a total of eight (8) HAN-related pulses per minute.  Over a period of 24 hours, that is 11,520 pulses.  And what if you do have an in-home display unit or smart appliances with which the smart meter would communicate?  I have not been able to find any documentation that would quantify the pulses that would result from a home that was so equipped with an in-home display unit and several smart-enabled appliances.  Logically, the potential for increased exposure is great.